As an accountant, a debt collector and, most importantly, an Asian, saving money is always on my mum’s mind. Saving money and getting the best possible deal is an everyday job, but this goal turns into an obsession whenever we go on holiday. No matter what job she is given – hotels, taxis or food – she manages to inflict misery on all of us, wherever we go. All for the sake of saving a few dollars. Let us look over the trials of the last twenty-five years…

It started early. When my parents first met, my mum decided to plan a romantic getaway for the two of them in Indonesia. “Don’t worry, I’ll take care of everything. Trust me – I know Indonesia!”, she sang. And he did – foolishly. After a full day of travelling, they arrived at their accommodation. A wave of dread washed over Dad as they peered through the gloom at the bare concrete room that greeted them. In the centre of it stood three planks of wood, nailed across two blocks of wood with a threadbare reed mat placed on top of it. This, it seemed, was the bed. Dread turned to horror as it slowly dawned on him that there was no toilet to be seen. Apprehensively he ventured out to look for it and stumbled across an unpaved marshy hole in the ground which would serve them for the next week. Unfortunately it did not end there. The next hotel that mum had lined up was, unsurprisingly, also a disaster. Instead of booking a convenient hotel for their one night transit in Jakarta, she decided to book a hotel 500 miles away because “it was such a bargain!”. That sealed her fate – never again was she allowed near a hotel booking.

Next up was transportation. The family was in Darjeeling for Christmas and one day we decided to visit the nearby Deolo hill. Dad and I would walk up, and mum and Katie would take a taxi and meet us at the top for lunch. After getting lost several times, we were two hours late to the top. We arrived feeling frantic and mildly terrified. How bad was the wrath waiting for us? We ran around the hill desperate to find them. But they were nowhere to be found. We stopped people on the street and asking them if they had seen a brown lady with curly hair with a smaller version of me. No luck there. Eventually, despondent, we slumped into a taxi and headed back to the hotel… where we found a smug pair waiting for us. “Can you believe he tried to charge us 50 Rupees for the taxi ride up? I would never fall for a scam like that. We had a much better time down here exploring the town!”, Mum giggled gleefully. Dad fumed; “YOU REFUSED TO PAY 50 RUPEES?! THAT IS LESS THAN 50 CENTS. Do you know how worried we were? That’s it. NEVER AGAIN.”

Finally, we had my Mum’s attack on food. Throughout the last twenty-five years, she’s regularly ruined our meals through her penny-pinching habits. It was not too bad to start with – she eased us in. She trained us, like most other Asians, to gorge ourselves on the hotel’s breakfast buffets. This meant that at lunchtime we could crouch around the kettle and eat a small pot of cup noodles on the hotel room floor and be sustained until dinner. However, on one of trips this strategy resulted in a gut-wrenching dilemma. We were the only guests in a remote hotel with no electricity and no refrigeration. Every morning the hotel staff laid out the exact same vat of curry for our buffet breakfast. Every morning mum ignored the stomach cramps from the day before and piled the increasingly questionable curry high on our plates, barking at us not to forget our training. We blanched in horror as she got stuck in. Unable to stomach the rotting curry, we resorted to siphoning away our portions and throwing them out when she wasn’t looking. “Never again!”, we whispered to each other.

But lately we’ve noticed some subtle changes alongside her normal thrifty behaviour. On our last trip together, she requested to go to a restaurant for lunch. If that wasn’t alarming enough, she then arranged to take a taxi to get there. Unfortunately the taxi meter was rigged and he cheated us by going an incredibly long way. “I knew it!” She cried, “These taxis are always trying to cheat you – never again!” 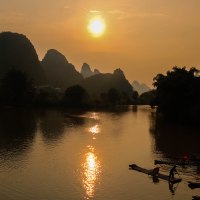 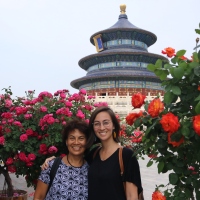 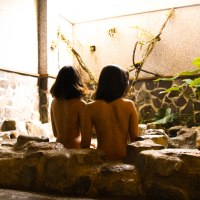